After a successful first year, the Scarborian Field Archer members decided to bash their heads together to come up with some alterations to the field course. Which will hopefully allow an extra two targets to fit in, make the course flow better, stop the hold ups we have been having on a few targets and create a few more challenging shots.

Alterations are as follows:

– New obstacle on the chamelon target, now archers have to shoot through a circle barrier on the red peg. Nicknamed the “polo mint”.
– Creation of a new target in-between, target number 5 & 6. Shooting a predator and prey.
– Alteration of target 6 (now 7). Shooting a moving target from a raised platform. Pegs are available at ground level, for those that don’t wish to use the platform.
– Removal of target 10 (Butterfly) and creation of a new path, to stop a choke point occurring. Shooting the Owl -> Racoon -> Deer instead.
– Slight alteration of pegs on the Fox.
– Moving of the “Brown Thing” target, so it is shot the other way, shooters will first shoot the Boar, then the Brown Thing target, moving onto the laid deer.
– Creation of a new target after the laid deer, helping to create a zig-zag pattern of shooting.
– Red, White and Blue pegs have been moved further back on the Parrot.
– Red / White pegs moved on the Zombie target.

Many thanks to those that helped with alterations with the course, Andy for his 3D animal creations and everyone who came up with ideas on improvements. 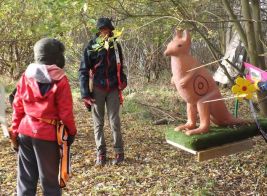 Platform for the moving target

Predator-Prey pigeon with a sore head